The Day The Spanish Stayed Inside.

On 15th March 2020 the unimaginable happened. Our lives across the globe changed in a way that we could never have believed possible. On that day in Marbella, right in the middle of the month that annually heralds spring with blue skies and warmth in the air, the skies hung uncharacteristically cloudy and dark, leaden with an ominous hue. This was not the Marbella that we knew so well.

What was most striking about these early days of lock down in Spain at least was the complicity with which it was accepted by all. I was already a resident here back in 2004. That year saw the coordinated bombings against the Cercanías commuter train system of Madrid on the morning of 11 March – three days before Spain's general elections. The deaths of 193 people and the injuring of 2000 more was the result of the deadliest terror attack seen in Spanish history, and the worst death toll in Europe since the Pan Am Flight 103 Lockerbie bombings of 1988. These atrocities took place just 3 days before a general election in which Aznar's Partido Popular was looking to defend his Prime Ministerial seat against a strong challenge from the PSOE, the Spanish Socialist Workers Party. Having received immense popular criticism over his decision to bring Spain into the Iraq war a year earlier, Aznar pounced on the opportunity to distract from any possible perceived threat from Islamic terrorists as a result of the participication in the United States led coalition invasion of Iraq and moved swiftly to claim evidence which implicated the Basque separatist organization ETA (Euskadi Ta Askatasuna). This was move that would prove to cost Aznar the election.

Why is this relevant to the lock down events of this spring?

Within hours of Aznar's announcement that ETA were to blame, the people of Spain took to the streets. There was an immense unease about what the government were claiming. I remember it so well. Having been born and bred in England, I had never seen such a massive and popular reaction to a government. The Spanish people wanted the truth. ´¡Basta Ya!´ were the words written and painted on banners and printed posters
which were being raised above the heads of the throngs of people of all ages and all social backgrounds who demanded that their government tell the truth. I watched in awe as the Spanish people mobilised themselves to raise their voice and insist that they would not be lied to. Imagine witnessing that as a young English woman whose only previous experience of demonstrations against government were the violently contained gatherings of miners, students and misfits in Thatcher's Britain. During these times, if you found your voice you would very soon experience the strong arm of the law and be silenced.

Here then was the fascination for me. A country of 47 million people, whose emphasis, rightly or wrongly, is on leisure and family time, who prioritise dancing and siestas over work, who believe in their right to be outspoken and critical having found their freedom after the previous years of the so-called ´Pacto de Olvido´. Here was a nation of fiery families and individual who were told to go home, stay indoors and sacrifice all individual freedom. And that was exactly what they did. For over 60 days!!

We are now in that ambiguous world within which the politicians are looking for ways to ease restirictions and present new phases of control in order to ease stark tensions that are mounting daily around the devastation that this is all having on the economy. There is no question that the fall-out from prohibiting people to go out of their homes and earn a living will be judged with hindsight to have brought far more suffering than the virus itself. There is without doubt an argument to be put forward about the veracity of the information that we have been given during this time in order that we do as we are told. And ultimately we all know very well that it is quite possible that we will never know the absolute truth of what is happening now.

Today we are given the freedom to move around more freely within our communities and within public places, although we are obliged to wear masks at all times. We comply because we are clear that we could endanger the lives of others who are more vulnerable if we happen to be carrying the virus. We have been intimidated, and fear is the key. There are many who have died and are still dying. The most tragic of these are those people who have given up their lives, literally in some cases, to care for others struck down by the virus. Within the medical institutions the saturation of infection is of course intense, exposing nurses, doctors and auxiliaries disporportionately to the risk of infection, and rendering them in many cases with little chance of not succumbing. These people are heroes, nursing the sick back to health and sometimes paying the ultimate price.

As for the rest of us, we are now at the beginning of the long slow path to recovery in an economy that relies on tourism, leisure and entertainment for it´s survival. We love Marbella. We will nurse it back to health in the best way possible. 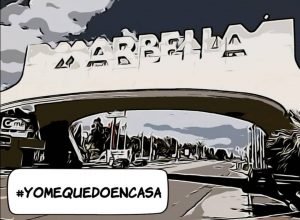