This Year´s Marbella Feria Is No More Than A Dream.

Every year in the first week or so of June, Marbella snaps to a colourful halt and all attention to work is abandoned. The city is celebrating it´s patron saint, San Bernabé, the altruistic Jew born with the name Joseph, to whom the Apostles awarded the name  ¨San Bernabé¨ after his generous act of giving money to the poor. The name stands for “Son of Exhortation.” During this week of festivities, the residents of and visitors to Marbella, do what the spanish do best. Disfrutar al máximo!

This year however, the feria ground lies silent and eerily empty. With the past months of pandemic lock-down and on-going social-distancing orders, the celebrations have been cancelled. At the beginning of May, the Marbella mayor Angela Munoz announced that the feria, it´s processions and it´s celebrations would not take place in 2020. The recinto ferial (feria ground) next to La Canada Commercial Centre is deserted. The raising and decorating of the casetas, and the erecting of the emblematic arches is not taking place. The local Marbellanos this year have to deny what to them is second nature. The women will not adorn themselves in vibrant and stunning flamenco dresses, and the caballeros will have no opportunity to polish their riding boots and brush off their Cordobes felt hats. The maginificent Andalusian horses must remain  in their stables and paddocks this year. With processions such as  Pilgrimage to the Shrine of the Patron Saint in Nagueles prohibited, the devout have no option but to find other socially distanced means of showing their reverence for their beloved saint. And the characteristically noisy locals will be celebrating in a much more muted way.

Prior to it´s current location, the Marbella feria was held much closer to the town centre in the barrio on the outskirts of the Casco Antiguo, known as las Albarizas. The site was narrow and cramped and didnt really allow the people of Marbella to do justice to their beloved saint in the way that they love to, with a high energy  ear-spitting fair ground, and numerous casetas and bars providing entertainment and dancing into the early hours of the morning. The La Canada location has been intended to be a temporary one. In 2015, plans were unveiled to establish a feria ground just north of the city on an area known as la Serrania. The new site covering 100,000 square meters, was unveiled as a hugely ambitious plan to recreate the Casco Antiguo (Old Town) of Marbella, in all of it´s intricate glory, complete with the cobbled streets and fountains of Plaza de los Naranjos, the Ayuntamiento building, and a replica of the small chapel. Only tine will tell whether or not we will see this feria dream become a reality. And for this year at least, the Marbellanos and the visitors who love the feria must also forego the reality of the feria, and simply dream of previous ones. 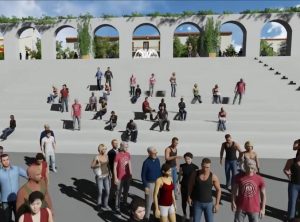 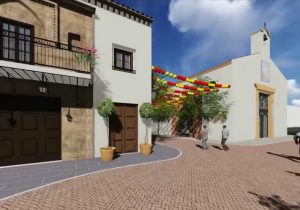