The Capitalist Tree, The Beautiful Invader and The Kashoggi Deer.

The eucalyptus tree is a welcome sight to visitors to the Iberian península, but it´s history is not without controversy, and it deserves it´s place on our list of intruders who have come to stay. The fast-growing eucalyptus is a native of Australia and Tanzania, where immense man-made forests of the species grow, but in an environment large enough to sustain their presence without damage to other species. Here in Iberia, this is not the case and the tree has wreaked havoc, crowding out indigenous forests of native oak and beech. Despite the proliferation of the hardy species, the tree is protected now, and it´s history of cultivation gives us a clue as to why. In Spain and in Portugal it was quickly realised to be a low-labour high-return commodity for paper production, leading to wealthy landowners clearing hectares of agricultural land, causing devastation to the communities of farmers who relied on traditional labour intensive agriculture for their livelihooods. Subsequently, the antipathy towards the tree in Portugal by the rural communities became so great that it earned the nickname the “fascist” or “capitalist” tree for the wealth it supposedly brought land-owners and industrialists at the expense of peasants and their land.

Within the branches of the eucalyptus tree can often be found another accidental native of the Costa del Sol. Exquisite in their colouring and wildly raucous in their communications, the grey and bright Green Monk Parakeet originally derive from Argentina, and after becoming popular in the pet trade, they have become noisy residents within many urban environments all over the world. Here in the Costa del Sol they favour the high branches of the eucalyptus tree. They are the only parakeets to nest communally; dozens live together year-round in large, multi-family stick nests built in trees and on power poles. Residents of the Southern Spanish coast have complained so much about the noise that they emit, and ornathologists have expressed such concern about the threat that these feisty birds preseent to native species that the main local councils of the areas affected by these beautiful invaders agreed in December 2019 to control the population by shooting them with air rifles. 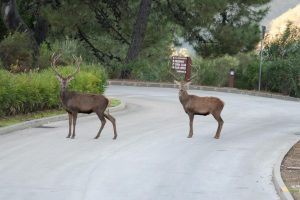 In the exclusive rolling hills of la Zagaleta much of Southern Spain´s unique wildlife can be enjoyed within the private estate where many of Europe´s rich and famous own fabulous homes built on acres of stunning hillsides. Falcons and eagles grace the skies, and the wild boar use their earth-moving skills in the dead of night to forage for roots and bugs, presenting a spectacle of freshly-turned earth free of vegetation in the morning. Another regular encounter is with the deer, whose grace is a wonderful sight as they move through the lovely landscape. However, with the estate of La Zagaleta being so exclusive, and with security so tight, these animals were able to relax and multiply, eventually presenting the managers of la Zagaleta with a problem. The solution, they thought, was simple. The over-population of the deer could be solved simply by rounding them up and selling them off to hunting estates in nearby Ronda. Or so it was thought. It was only when the wildlife authorities stepped in that it became clear that these particular deer were not indiginous to the hills of the Costa del Sol. These animals had infact been imported from the north of Spain by Saudi Arabian business and arms dealer, the late Adnan Kashoggi in the 1970´s to populate the hunting ground that he establised within the 900 hectares in Benahavis, known back then as ¨La Baraka¨. Kashoggi had bought and established this estate creating his extraordinary luxury country home in Andalucia. In the early 1990´s La Baraka was acquired in a publc auction and the dream that we know today was born, of one of Europe´s most priviliged residential areas, including many services such as the exclusive private heliport, an equestrian club, two golf courses and a lake.